Disney's Animal Kingdom in Orlando, Florida opened in 1998. To celebrate a Disney toy series was done based on animals for the new park opening. Most were real animals and one was imaginary. The theme of the new park was a imagined celebration of all living animals, imaginary and extinct. Animal Kingdom is the largest Disney park at 403 acres. Almost four times the size of the Magic Kingdom. The park is so big that the attraction Kilimanjaro Safaris is a 100 acres which is about the size of the Magic Kingdom.

The toys you could have gotten at most locations in the USA were:

In 1998 when the parked opened, McDonald's sponsored a section called "DinoLand U.S.A". They opened two locations in the park. Petrifries a free standing location & Restaurantosaurus a sit down dinning location. They had a ten year contract for these locations that were then turned into official Disney food locations and no longer have McDonald's material on them. The standig location restaurant name was changed to trilo-bites.


During the opening the McDonalds in the park had exclusive toys in the USA that year. They were Generic Dinosaur squirters that you could fill with water and squirt at each other: 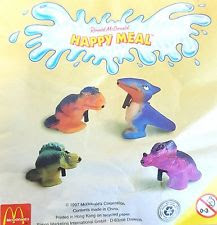 The toys were also featured outside of the USA in other countries such as Europe & the UK a year prior as generic water squirters. The ones at animal Kingdom had Disney Animal Kingdom printed on the bottom of them and the international toys did not have that printed on them:

The national chain McDonald's happy meal boxes had cut out assemblies that were perforated so you could pop out pieces and assemble:

There wear also exclusive boxes made for the McDonald's inside Disney's Animal Kingdom:

In the early years of McDonald's inside Walmart they would have exclusive toys. During this promotion they had a Tortoise:

The cups featured different parts of the parks:

DinoLand U.S.A. with a carnosaurs & triceratops from the Dinosaur rover ride
Gorilla Falls with a gorilla and a hippo
Safari Village with the imaginary purple dragon & a Brontosaurs
Rhino & lion