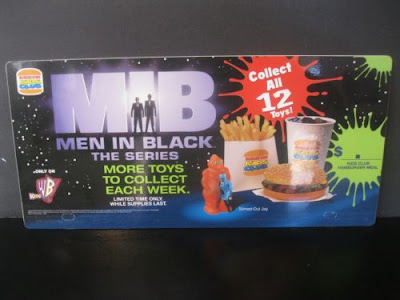 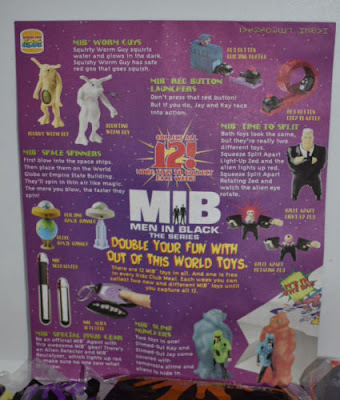 the toy series was released to promote the animated series created after the success of the movie called, "Men in Black" in 1997. Below is a trailer to the move that inspired the cartoon series:

The TV Commercial that played during the toy promotion:

There were 12 different toys that came out in sets of two at a time:

MIB Red button launchers. One with a garage that would cause an alien to pop out when hit and another with a track that car would loop around

MIB Time to Split. Two different Zed figures that measured about 3 inches each (Zed was the Boss of the organization) one opens to reveal an eye the other opens and looks like an alien

MIB Space Spinners. Space ships you would place either on the earth or on the Empire state building and blow on them to make them spin

MIB Speacil Gear. The Neurolizer and the Alien detector keychain

MIB Slime Muncfers. Both Agent K & Agent J get slimed by an different color aliens. The slime would go on the figures that would measure about 3 inches and the aliens measures about 5 inches tall.

Click the video below to watch the Men in black Animated Series intro the toys are based on: