There were eight different toys during the promotion. The boy toys were the Transformers Cybertron Robots in Disguise Action figures named:

Transformers Cybertron was an animated series that played on TV, the video below is a introduction to the cartoon:

The other series was the Care Bears. The Care Bears were another cartoon series that had just made a movie at the time. There were four different key chain bears you could have gotten: 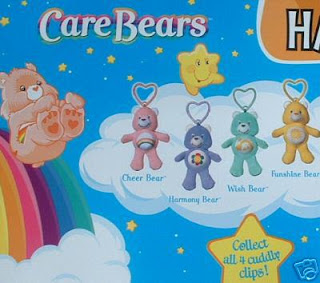 Each Bear had a different color and a symbol on there chest to let you know whom they are. The video below is the  Care Bear Movie you could have gotten on VHS at the time: