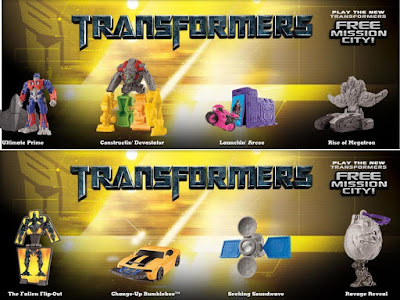 The toy promotion was done in 2009 to promote the 2nd transformers film before it hit theaters. The video below is the TV commercial for the promotion that was also running at the time to get adults to come:

The Burger King chain stores ran a promotional game called
Transform YOUR WAY™ it gave restaurant guests a one-in-two chance of winning one of thousands of prizes, including $1 million*, a 2010 Chevy Camaro 1SS, BURGER KING® food items and more. Each game piece offers a prize under one of the two scratch-off areas, making every game piece a possible winner. Game pieces were available on specially marked menu items while supplies lasted. It lasted from June 22 to July 19.

The eight toys you could have gotten were:
1) Ultimate Optimus prime
2) Construction Devastator
3) Launchin Arcee
4) Rise of Megatron
5) The Fallen Flip out
6) Change Up BumbleeBee
7) Seeking Soundwave
8) Ravage Reveal

Movie trailer for the film: