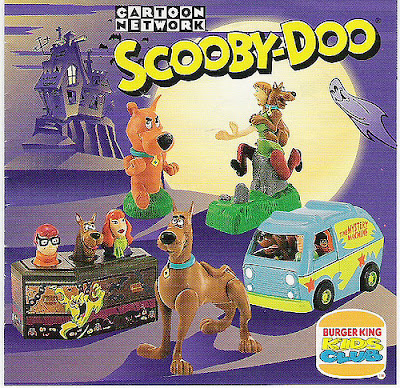 Burger King teamed up with Cartoon Network in 1996 to make Scooby Doo toys. The Mystery Machine was a pull back car. The Coffin had Velma, Scooby, and Daphne in it and was also a pull back car. When the coffin was moving the heads would move up and down. The scrappy doo was a wind up toy that arms would move. The Scooby and shaggy on tombstone toy was also a pull pack car and shaggy's legs would spin around like in the cartoon. The Scooby doo is a articulated action figure that can sit, stand and his eyes & color would glow in the dark.

The series came out August 19th to September 15th of that year. Click Here to see the ad for it.