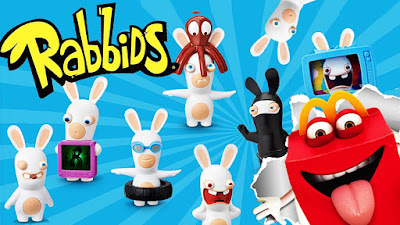 The toys were made as a tie in promotion for the video game ray man Rabbid Rabbits. The video below is a trailer of the video game:

The game was released for the Nintendo Wii, November 2006.

The first toy was known as "Rascal Rabbit", You turned on a switch on the back of the rabbit and it sticks out it's tongue when you press the belly and makes a sound. (Bottom left Rabbit from image above)

Toy #2 is a tire spinning rabbit (2nd from the left next to the one with a pink looking TV) When you pressed a button on his back the tire would spin.

Toy #3 is X-Ray Rabbit. First you turned on the rabbit with a switch in the bag. Then  you pressed the button on the Rabbits back and the pink looking TV lights up and shows a image of a Octopus.(Rabbit all the way to the left)

Toy #4 is the "Blaghh" Rabbit (Bottom left) Has a switch on the back of it and makes a "Blaghh" sound when you move it's ears.

Toy #5 is a Ninja Rabbit (One in the middle). You could twist the plunger backwards and then it will unwind and move in a circle forwards

Toy #7 is the Wobble Rabbit (Far right Rabbit) You shake it and it moves and makes noises.

Toy #8 Launching Octopus Rabbit  (Top left corner) had a button on the back of the rabbit to launch the Octopus off it's head.

Video below is the commercial McDonald's did to promote the toy series: