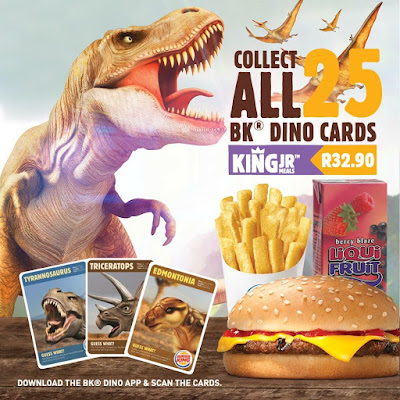 You would get a 3 pack of dinosaur cards with your meal in south Africa during the promotion. Each of the 25 cards showed a 3-D animation of a dinosaur superimposed on a real background seen through a smartphone camera. You could download the free app on either the play store or App store (apple products) in order to experience the AR aspect. Each card would show the dinosaurs name, sounds it would make and educate you about the dinosaur.

List of dinosaurs cards:
Gallimus
Stegosaurus
Triceratops
Edomontonia
tyrannosaur Rex
and 20 more (Will add names if discovered. Could not get cards stateside)