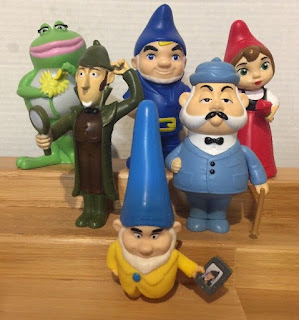 Made in promotion for the sequel to Gnomeo & Juliet and called Sherlock Gnomes. The movie revolves around gnomes mysteriously disappearing in London right after Gnomeo & Juliet move there. The figures from Burger king were 5.5" inches tall! Most had levers in the back to lift up what was in the figures arm. The yellow shirt with blue hats gnome name is Benny and the frog is called Nanette. The movie was not released till March 23rd of the following year. Click here to watch trailer.

There was also a tie in flash game made to promote the movie and test your memory. Click here to play it.