In 1995 Disney teamed up with Burger King to make Promotional toys for the first movie. You could get one of six toys:
Buzz Lightyear- Plush toy
Woody- Plush toy
Mr.Potato Head- Hard Plastic, does not come apart
Rex- Hard Plastic
Army Men- Hard Plastic and have Disney stamps on the bottom of them. 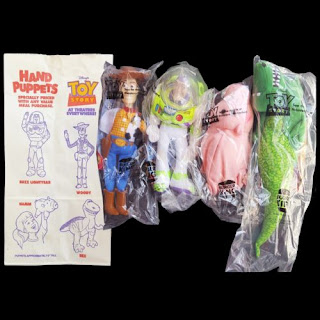 The 1995 toy story set was made to promote the theatrical release of toy story. It was Pixar's first full length film. Trailer below:

The toys were given five different TV ads:

The toys were so popular that Burger King and Disney did another toy promotion in 1996 for Toy Story when it was being released on VHS tape.