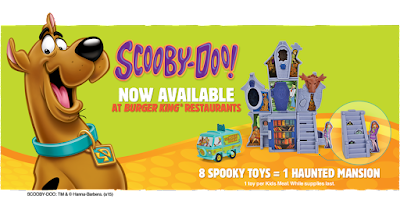 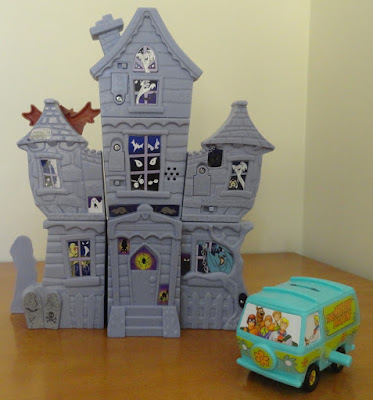 In 2015 Burger King ran a promotion with Scooby doo. This was the 4th toy promotion featuring the Mystery Machine and gang. There were 8 toys in all that when combined would make a haunted house. 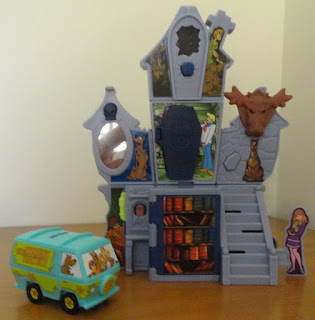 The Mystery machine came blank with sticker sheets to put on it. The mystery machine was a wind up toy that would move across the floor when you let go along with having a ghoul come up from the top middle area that would go up and down.

Daphne came with a sticker stair case. When you push Daphne in the ghouls would stick up in the stair case.

One of the Scooby Doo's was called Scooby Verse the Moose head. The package also included stickers to put on the item. When you would hit the button, the moose head would fall on Scooby Doo.

The haunted switch arr o (Bookcase) came with three stickers. When you open the bookcase you will see Scooby & Shaggy. When you close and open it again you will see a monster!

The Counts room (One with Fred in it) It came with two stickers. The back of it has a switch that you turn on to make Dracula make a laughing sound when you open the bookcase.

The Haunted fireplace (Has Velma) It came with three stickers. The Green part near the frame slides down and a monster face is revealed instead of the nice portrait you see next to Velma.

The Ghostly Mirror (Other Scooby Doo Mansion piece) came with two stickers. When you press the skull near the top of the mirror you see a ghostly reflection in the mirror.

The Last piece was called "Gaze of the Mummy" it included two stickers. It featured Scooby and Shaggy and when you pressed the button in the middle of it a Mummy would light up.