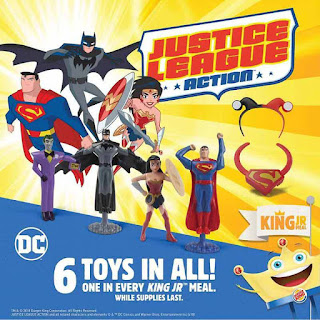 The toys are based off the cartoon network show called Justice League action. You could have gotten a action figure of Superman, Batman, Wonder Woman, or the Joker. You might of also gotten a Superman “S” Shield necklace or Harley Quinn headband.

If you pressed the batman down the wings would move up and down.

Joker had a button on his back that would make is arm raise and show a sign saying "Ha! Ha! Ha!"

Wonder Women's right arm could be move and the left arm had a detachable shield. On the back of the figure you could hit a lever and her left arm would move up with the shield

Superman's arms move up and down when you push him down

The Harley Quinn Head Band also included stickers and could fit on most kids heads.