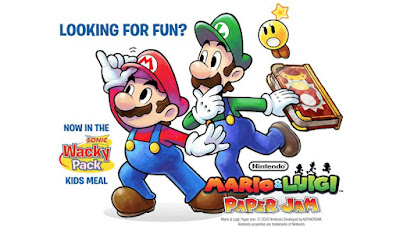 Made to promote the video game Mario & Luigi Paper Jam.
Click the video below to watch the trailer:

The promotion had five different Mario & Luigi:
Paper Jam toys including a Mario toy that races on wheels.
Another one that featured Paper Mario and Luigi that can spin around like a top. Two of the toys resemble papercraft, or paper models, based on the papercraft battles featured in the game. This promotion was between April 19 to June 30

The game was released January 22nd, 2016 for the Nintendo 3DS