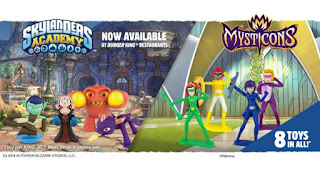 Nelvana’s Mysticons premiered on Nickelodeon in the United States and YTV on August 28, 2017.
You would get one of four figures with your meal.

Skylanders Academy is a Netflix-original series from TeamTO based on Activision Blizzard’s hit video-game franchise. The first season debuted on October 28, 2016. The Skylanders are plastic action figures without the NFC tag. The figures do not work in the Skylanders video games.